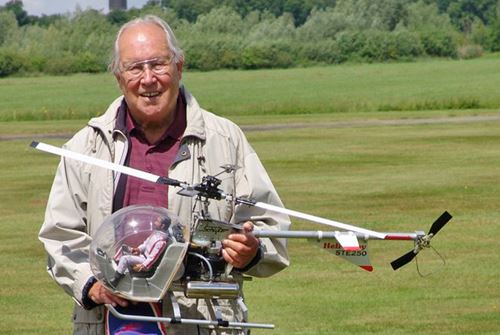 Our friend Dieter Schlueter just passed away on June 16, 2021.

Dieter was one of the most gracious people I have ever met.   I was a lucky guy to meet him right after he set two FAI world records for R/C helicopter duration and distance in 1970.  He showed me all of his 8mm films of his early experiments and flew his “Cobra” helicopter for me.  Before I left I asked him to put my name on the waiting list for the first 50 hand made Cobra kits he planned to produce in his basement.  In March 1971 I received my first semi  scale Cobra kit.  When I started flying the Cobra during April I needed a lot of help and for several months I exchanged letters with Dieter biweekly and he never failed to reply.

In the mid 70's Dieter formed his own company “Schlueter Modellbau” and turned it into a very successful worldwide business.  The company specialized in R/C helicopters and also served other areas of modeling.  Today, Dieter is recognized as the father of R/C helicopters.

I am eternally grateful to Dieter for getting me into R/C helicopters in the early days. Without his inspiration I would never have embarked on a modeling career that included being a member and chairman of the FAI/CIAM F3C subcommittee for many years.

Rest in Peace my friend.

I was saddened to hear about my old friend Dieter Schlueter. I was fortunate enough to visit him at his factory in the early days and went on to become good friends over the years. I will be ever grateful for his contribution to the sport which helped so many of us. R.I.P Dieter Vago Nordigian